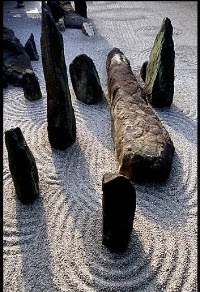 ‘What is the basic aim of Zen?

The essence and final aim of Zen is the experience of enlightenment or Satori.

'Zen is the art of seeing into the nature of one’s own being; it is a way from bondage to freedom; it liberates our natural energies; it prevents us from going crazy or being crippled; and it impels us to express our faculty for happiness and love.’ Suzuki

This insight into one’s own nature is not an intellectual one, standing outside, but an experiential one, being inside, as it were. This difference between intellectual and experiential knowledge is of central importance for Zen.

This aim is fundamentally achieved through the practice of Zazen or silent meditation.

However, the Zen conception of the unconscious clearly differs from that of Western psychology. As Suzuki comments, “In Zen Buddhism the unconscious is not a psychological term neither in the narrow or broader sense… It is fundamentally different from the psychologist's unconscious. It has a metaphysical connotation. When Hui-neng speaks of the Unconscious in Consciousness, he steps beyond the unconscious as understood by psychology."

The Unconscious in Zen is, simply put, the mind of the cosmos. Suzuki on occasion calls it the “Cosmic Unconscious.” Yet it is also our own unconscious, our higher Self. We are intimately connected with it. It is beyond us but also within us.

So in Hindu and Buddhist teachings God must be everywhere if he is anywhere at all. He is playing hide-and-go-seek with himself through us. The part of himself that forgets he is God, the part that is seeking himself, is the ego. The part that is hiding is what we call the unconscious, but it is only hidden or unconscious for as long as the ego remains unconscious of it.

The awakening of the ego to its true nature is known in Buddhism as enlightenment, in Zen as satori.

Contrary to what some believe Satori is not the dissolution or abolishment of the ego. We need an ego, a well developed one, in order to survive and also in order to experience Satori.

Satori is not an abnormal state of mind; it is not a trance in which reality disappears.

Satori is comparable to ‘the state of grace,’ a state of mind where everything is perceived as flowing from God. Theologically, the principle of Grace, of God giving his favour to humanity, makes possible the incarnation of God’s spirit in the world, a process symbolised through the figure of Christ.

In psychological terms, it is a state in which the person is completely tuned to the reality outside and inside of him, a sate in which he is fully aware of it and fully grasps it. He is aware of it; not as of an object over there which he grasps with his thought, but it, the flower, the dog, the man, in its, or her, full reality.

He who awakes is open and responsive to the world, and he can be open and responsive because he has given up holding on to, and thus has become empty and ready to receive himself as a thing. To be enlightened means ‘The full awakening of the the total personality to reality.’ Fromm

The experience of the mind’s union or oneness with the world and God is something Jung cannot see as happening directly and is what differentiates psychology from mysticism.CW 11 p. 505.

In Jung’s early thought, it is evident that the concept of self-realisation contrasts sharply with the Eastern concept and with mystical thinking in general. Jung believed that the ego and the unconscious Self are distinctly separate entities. Consequently, their relationship cannot feature the experience of oneness that is intrinsic to mysticism. Their relationship is at best vis-à-vis, a dualistic encounter or dialogue (as observable in Jung’s Philemon dialogues).

Thus does Jung also claim that it is “only by indirect means” that we may come to know the unconscious. CW 11 p. 404.

These means – dreams, fantasies, visions, active imagination, etc. – are extremely valuable, yet according to Eastern systems, they are not direct knowledge of the Self but representations or second manifestations of it. This applies to their content as well: in Jung’s system, the God or Self archetype is understood as an archetype, but not in terms of the thing-in-itself and as influenced by Kant, Jung did not believe in the possibility of knowing the “archetype-in-itself”. See CW8 p. 213.

Most significant of all is that Jung did not believe that the unconscious could possess a dynamic consciousness itself aside from the quasi-consciousness of the archetypes.

Jung, unlike Zen, did not initially recognise the unconscious as the mind of the cosmos or God.

To Jung, the self is not the living Self or God, but the total personality of the collective unconscious or psyche, it may be Godlike but it is not God.

By contrast, in Zen and Mysticism generally, the transcendent may be experienced as immanent.

This explains why early on Jung felt that Eastern intuition overreaches itself when it claims ‘at-one-ment.’ Jung sees it as an experience beyond the ego; Freud sees it as occurring before the ego, in the regressive ego’s “oceanic womb feeling” that the foetus supposedly enjoyed. Both attribute the experience of oneness to the imagination of an ego aspiring to overstep its limits.

The experience and writings of Zen masters and Mystics down the ages testify and maintain that, if one has a well developed ego, one will neither be “swallowed” by the unconscious or the cosmos.

What we know is that on his deathbed, Jung was reading Charles Luk’s Ch’an and Zen Teachings: First Series. This is the first of a series of three highly sophisticated books. Luk was a Chinese monk and scholar involved in keeping alive one of the few remaining Zen or Ch’an sects in China in the last century. He studied under the renowned master Hsu Yun.

Included in the book are Hsu Yun’s discourses to the monks in the monastery of which he was abbot. These discourses were given during an intensive retreat. If one is in a state of Great Doubt or some other form of mortificatio, and has one-pointedness of mind such as the kind ushered in when one is dying, a master’s poignant discourse—the way he says something or emphasizes a certain phrase—can itself be a trigger for satori.

Very likely, however, Jung, arguably a master in his own right, may have already at this point been familiar with the satori state, and he may have been merely reading and reconfirming what he already knew. He was, after all, not only dying, but concluding a most astounding and historic journey of consciousness, much of it couched, no doubt, in the language of alchemy, but a significant part of it, as the above vision and dream illustrated, in the wisdom of the East.

And what tells us that Jung was already familiar with satori if not actually in a satori state? He does. Too weak to write anything himself, he asked Marie-Louise von Franz, who was among the few at his bedside during this time, to write Luk a letter. To quote von Franz: “. . . he was enthusiastic. . . When he read what Hsu Yun said, he sometimes felt as if he himself could have said exactly this! It was just ‘it’!”

“It” is in italics and also with an exclamation mark, apparently connoting the Unconscious of Zen.

When Jung met at this same time with his friend Miguel Serrano, he told him the following, quoting Jung from Serrano’s notes: “I have just finished reading a book by a Chinese Zen Buddhist. I felt as if we were talking about one and the same thing and were simply using different words for it. The use of the word ‘unconscious’ is not the decisive thing; what counts is the Idea that lies behind this word.”

Can Jung here be referring to anything else but the central Idea of Zen, the Doctrine of No-Mind, Emptiness, the Void? Clearly, these reflections occurring in Jung’s final days convey a sense of enthusiasm and conviction absent in his earlier writings on the East.

This experience of grace or satori appears to be the quintessence of mysticism.

In the Zen monasteries of Japan the preferred method is meditation, guided and inspired by a curious succession of intentionally absurd meditation topics known as koan. These are drawn, for the most part, from the sayings of the old Chinese masters; as, for instance:

"Show me the face you had before your father and mother were born!"

"What is the sound of the clapping of one hand?"

Such conundrums cannot be reasonedupon. They first focus, then baffle, thought. In the monasteries the candidates for illumination are ordered by their masters to go meditate on these enigmas and return with answers. Time and time again they fail and are sent back to meditate further -- until one moment, suddenly, the intellect lets go and an appropriate retort breaks spontaneously forth. It has been said (I am told) that the ultimate koan is the universe itself, and that when this one has been answered the others come of themselves. "A koan," D. T. Suzuki has declared, "is not a logical proposition but the expression of a certain mental state." It is that mental state of transrational insight that the apparently absurd, but actually carefullyprogrammed sequences of brain-busters are meant to provoke. And that they work andhave worked for centuries is the answer to any question a captious critic.

The dictionary definition of myth is “A usually traditional story of ostensibly historical events that serves to unfold part of the world view of a people or explain a practice, belief, or natural phenomenon.” Other definitions also specify that myths relate toreligious beliefs. While koans clearly fit the criteria of these definitions, perhaps more germane to this discussion is the presence of archetypal material within the stories. The very persistence of koans over centuries and across cultures and eras demonstrates a resonance within the human psyche that affirms their archetypal nature, qualifies them to be considered as myths, and affirms they are worthy of being mined for their symbolic messages. If not for their archetypal quality and their ring of truth in the human experience, they would not have been carried through the centuries and across continents to be studied in the West today.

The satori, the original religious experience of the East, is described as a natural occurrence that cannot be comm unicated verbally. It is through the enlightenment of satori that man sees the nature of the self and frees himself from its illusions. Having once had this experience, man can begin to see things in terms of nonego. He does not see new ideas or things; instead, he sees them differently. Satori is found through the Koan, an ambiguous question with no formulated answer; it is through studying the many koans that the answer breaks through. The answer is not formulated by the conscious mind, but is found in nature and in the unconscious. This belief, the satori experience, is similar to that of Western thought in terms of the transformation of unconscious processes into conscious thought. This also means that man is not born in a state of tabula rasa, but with preconscious or innate ideas. In man's search for wholeness he bursts through to his unconscious, the recognition of which enables him to comprehend the uncomprehensible unconscious. In the modern West, it is the psychotherapist who smooths the path for those seeking wholeness.