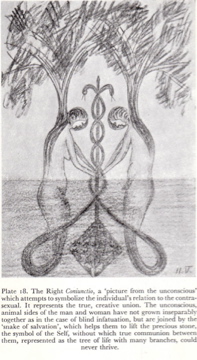 A part of our persona is the role of male or female we must play. For most people that role is determined by their physical gender. But Jung, like Freud and Adler and others, felt that we are all really bisexual in nature. When we begin our lives as fetuses, we have undifferentiated sex organs that only gradually, under the influence of hormones, become male or female. Likewise, when we begin our social lives as infants, we are neither male nor female in the social sense. Almost immediately – as soon as those pink or blue booties go on – we come under the influence of society, which gradually molds us into men and women.

In all societies, the expectations placed on men and women differ, usually based on our different roles in reproduction, but often involving many details that are purely traditional. In our society today, we still have many remnants of these traditional expectations. Women are still expected to be more nurturant and less aggressive; men are still expected to be strong and to ignore the emotional side of life. But Jung felt these expectations meant that we had developed only half of our potential.

The anima is the female aspect present in the collective unconscious of men, and the animus is the male aspect present in the collective unconscious of women. Together, they are refered to as syzygy. The anima may be personified as a young girl, very spontaneous and intuitive, or as a witch, or as the earth mother. It is likely to be associated with deep emotionality and the force of life itself. The animus may be personified as a wise old man, a sorcerer, or often a number of males, and tends to be logical, often rationalistic, even argumentative.

The anima or animus is the archetype through which you communicate with the collective unconscious generally, and it is important to get into touch with it. It is also the archetype that is responsible for much of our love life: We are, as an ancient Greek myth suggests, always looking for our other half, the half that the Gods took from us, in members of the opposite sex. When we fall in love at first sight, then we have found someone that "fills" our anima or animus archetype particularly well!